Editor’s note: ULI Sacramento was one of four district councils (along with ULI Chicago, ULI Arizona, and ULI Tampa Bay) selected through a competitive process to identify land use and transportation barriers to healthier and more equitable places and provide recommendations for local policy shifts and reforms. The program is spearheaded by the Institute’s Building Healthy Places Initiative with support from the Robert Wood Johnson Foundation.

A ULI Sacramento task force is working to strengthen community engagement in an underserved, underinvested part of the city with the goal of advancing development that promotes health and social equity. The Health and Equity Task Force, which began work in 2019, has for the past 18 months evaluated health and disparity issues in the Meadowview neighborhood of South Sacramento with an emphasis on lifting it up through community-led land use and transportation improvements.

The project built on the work of a 2018 ULI Advisory Services panel, which advised the city on creating more equitable transit-oriented development to help boost the use of two light-rail stations in South Sacramento. The panel’s overarching recommendation—“Do projects with the community, not to the community”—carried over as the philosophy guiding the task force’s work in Meadowview.

The neighborhood, while ethnically and culturally diverse, has suffered from years of underinvestment that has resulted in limited options for employment and affordable, decent housing, as well as a dearth of convenient and safe transportation alternatives, safe streets, high-quality schools, high-quality health care, and health-promoting amenities such as common spaces and parks.

As a result, even though residents want neighborhood improvements, many are distrustful of real estate and economic development proposals they view as overlooking their needs and leading to gentrification and eventual displacement. The distrust is fueled by a legacy of bold plans and promises that failed to include funds for construction or result in new infrastructure.

Given the residents’ concerns about new development, the task force members concurred that the key to a successful, equity-focused transformation would be to: 1) ensure authentic community involvement, 2) intentionally incorporate health outcomes into project design and creation, and 3) leverage the neighborhood’s diversity as a marketable asset and an economic development driver. The group’s work is detailed in an upcoming report, ULI Health and Equity Taskforce Report and Community Toolkit. The task force’s one-day UrbanPlan session at a Meadowview school was highly successful, serving as an education opportunity for students and an effective community outreach tool.

“Our goal was to commit to using a health and social equity lens to catalyze community empowerment, engagement, and partnerships that result in development that reflects the needs of the community while reducing the risk of displacement of existing residents and businesses,” said Bodipo-Memba, director of sustainable communities for the Sacramento Municipal Utility District. “Sometimes, when people think about creating equitable development, they start by looking at [the impact of] huge construction projects. But achieving equitable development really starts with the basics—which is saying, ‘There are [community] spaces we can activate. Let’s do this together, and make sure what we are doing meets the needs of people on the ground.’ That creates trust.”

The task force began its initiative with a comprehensive effort to reach as many community members as possible for inclusion in the decision-making process. During late 2019 and in 2020, the group engaged with nearly 600 neighborhood residents, including in-person and virtual meetings as well as surveys taken before and following the onset of the pandemic and during the protests for racial justice. The surveys showed that community members consistently prioritized job creation and training, affordable housing, youth programs/education, and safety.

UrbanPlan: A Key Part of Creating Good Will

Another key component of the task force’s community engagement was to host an abbreviated version of UrbanPlan—ULI’s popular urban design and development curriculum for high school students (as well as undergraduates and public officials)—at a neighborhood school (the event was held prior to the COVID-19 outbreak). This first-ever, one-day UrbanPlan for Youth session involved students receiving an overview of the urban development process and being challenged to create a transformative neighborhood design, all within about six hours.

The task force felt that UrbanPlan could serve not only as an education opportunity for the youth, but also as an effective outreach tool to overcome language barriers within a community with a high number of non-English-speaking residents. It was introduced with the belief that the students would take lessons from the UrbanPlan experience back home and discuss them with their families—helping to build community interest, momentum, and trust as a result of participation in the program.

“We were amazed at what this extremely diverse group of students came up with in such a short period of time. They were competitive, motivated, and incredibly sharp, and they quickly grasped the concepts to create really compelling solutions,” he said. “It makes me hopeful that some of the students will eventually join the industry.”

On the basis of that experience, the task force is planning another one-day UrbanPlan session that will be a virtual event open to all Meadowview community members as participants; program materials will be sent to participants well in advance to make virtual learning as meaningful as possible.

“We are trying to find that sweet spot in terms of how much time they can and want to give, while offering them a quality experience,” he said. “We are creating good will and political capital with the community, and UrbanPlan is a big piece of that. It helps empower the residents to be involved in the future development of their community.” 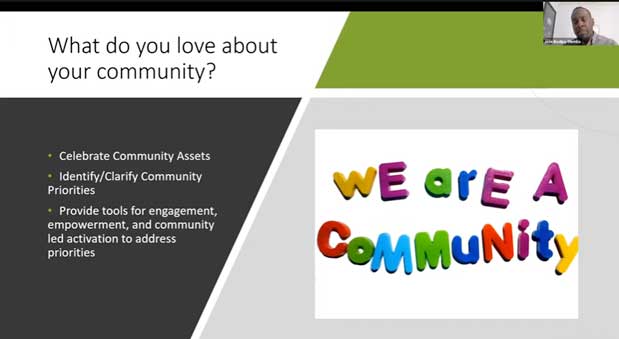 A survey of Meadowview residents showed that they consider the neighborhood’s sense of community to be a strong asset. ULI Sacramento Chair and Task Force Chair José Bodipo-Memba is shown presenting survey results virtually to community stakeholders.

Task force findings and recommendations based on the community outreach process include the following:

Teams with cross-functional expertise are better positioned to advance project goals and outcomes: The task force was composed of members with different professional backgrounds, which helped ULI Sacramento expand its network and engage a larger group via introductions to South Sacramento community members. Based on this experience, the task force recommended that future working groups be multidisciplinary in nature.

Multiple engagement methods increase participation: The task force was able to effectively engage with key business, real estate, political, and high-level community leaders through individual and small group meetings. However, this approach was not as successful with grassroots community leaders, in part because the task force was introduced to some of these stakeholders later in the project. As a result, the task force recommended incorporating multiple outreach pathways into grassroots-level projects.

The community engagement effort shaped the task force’s development of toolkits to help community members navigate what can be a complicated and noninclusive process for planning, design, and development. Toolkits were created for three components of the process—development site activation, project funding and budgeting, and project approval.

The project funding and budgeting toolkit addresses the gap between opportunities identified for new development and revitalization in Meadowview and obtaining funding for projects that are aligned with community priorities. It includes steps for negotiating the budgeting process.

The project approval toolkit helps empower community members to voice their needs during the planning and entitlement process, rather than after the approval process has been completed. This includes guidance on how to effectively participate in site identification, pre-application, entitlement application, and project reviews and hearings.

As part of its initiative, the task force also developed recommendations for city officials to ensure that community engagement is an ongoing, necessary component of land use decision-making going forward. Among the recommendations:

While the pandemic continues to affect the task force’s ability to conduct face-to-face community outreach, it is continuing to work with Meadowview residents and public officials on improving the neighborhood through community engagement. Following additional meetings to further pinpoint what the community wants developed and where, the task force is planning to present a proposal for the activation of a site selected by community members to Sacramento City Council member Mai Vang, whose district includes Meadowview. This action would represent a key step in an ongoing effort to transform the area into a more vibrant, equitable, and healthier living environment.

“We want to narrow in on exactly what the community wants done and who the community champions are who could make that happen,” Bodipo-Memba said. “The good news is we have a lot of ideas with momentum. The Meadowview community has chosen to lean in and engage.”

More from this series: