Although air travel—particularly international air travel—dropped significantly in response to the COVID-19 pandemic, people are starting to fly again as vaccines roll out. The return dovetails with recent trends in airport renovation and design that emphasize sustainability, air quality, more spacious terminals and concourses, and more efficient passenger flow. Also, passenger facilities are increasingly reflecting aspects of the cities and landscapes they occupy, resulting in distinctive places that may entice travelers who are only passing through to consider visiting in the future.

The following 10 projects—all completed during the past five years—include a terminal with an undulating timber roof that resembles ocean waves, an airport entertainment and retail complex with subtropical gardens and a 130-foot-high (40 m) indoor waterfall, a desert airport protected from the sun’s heat by a patchwork of colorful patterned metal panels, and a terminal with a pleated roof that both references nearby mountains and facilitates natural ventilation. The design of the nine-gate expansion of Austin-Bergstrom International Airport takes cues from a dance hall. Opened in 2019, the expansion allows for a 36 percent increase in passenger volume. The local office of Gensler, along with Austin-based Carter Design Associates and Sunland Group as associate architects, modeled the new concourse after the spacious interior of the oldest dance hall in Texas, Gruene Hall, including its exposed trusses.

To draw passengers through the concourse, the design team created a circular two-level structure at one end, inspired by Austin’s distinctive moontowers, which are lighting towers dating back to the late 1890s. At floor level, the structure holds a restaurant; helical stairs lead up to Delta’s Sky Club Lounge at the mezzanine level. A new, sheltered outdoor observation deck serves as a “front porch” for the terminal and offers travelers seating and views of planes taking off and landing. (Above and below: Fernando Guerra/FG+SG) 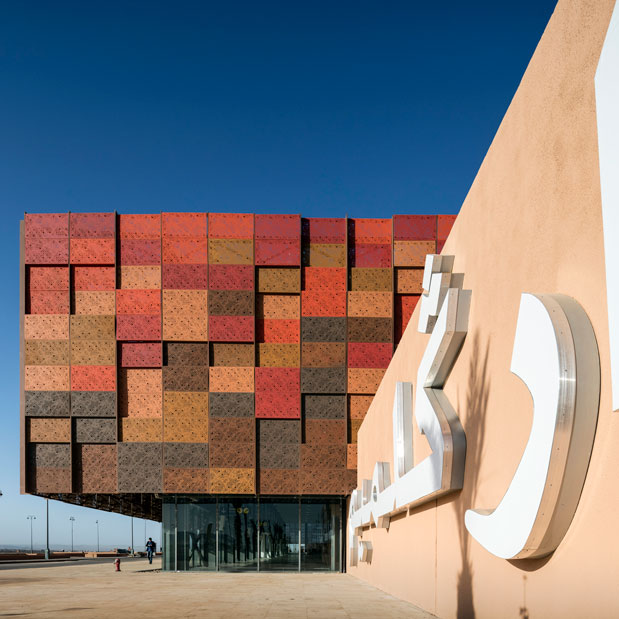 Calling itself the “Gateway to the Sahara,” the city of Guelmim in southern Morocco has a hot desert climate. On land that previously accommodated a military base, the new Guelmim Airport relies on design strategies to minimize heat while still letting in plenty of natural light. The building consists of a long, linear glass box in two double-height volumes, one for departures, the other for arrivals. Sandwiched between the two is an accessible patio garden shielded by stretches of white tensile fabric that filter sunlight.

A protective skin of perforated metal panels surrounds the glass box to provide shade. The designers, Rabat, Morocco–based Groupe 3 Architectes, drew on the geometrical patterns common in the region to give the panels a range of desert colors, from red to brown to ochre, and by offsetting each panel slightly, minimizing the building’s visual mass and producing a patchwork effect reminiscent of the region’s woven textiles. The airport was completed in 2018 for the Moroccan Airports Authority. San Francisco International Airport embarked on a large-scale renovation and expansion of its aging 1960s-era Terminal 1 to improve functionality, reflect the Bay Area, and embody high levels of sustainability. Opened in 2019, the first phase includes a nine-gate section of Boarding Area B as well as Terminal 1 Center, which has pre-security spaces, a central concourse with an art gallery and food halls, and a new mezzanine linking to ground transportation. The facility includes an exhibit dedicated to the life of San Francisco supervisor Harvey Milk, a civil and human rights leader who became one of the first openly gay elected officials in the United States in 1977. Singaporeans have a tradition of spending time in their city-state’s airport even when not traveling. The airport’s newest addition, Jewel Changi, serves as a place for locals and international travelers alike to hang out. It contains a large indoor forest, a park at the fifth level, the world’s tallest indoor waterfall, and extensive gardens along with restaurants, shops, a hotel, walking trails, and other publicly accessible gathering spaces. The result of an international competition that was won by Moshe Safdie and the local office of Safdie Architects with local developer CapitaLand, the glass-enclosed doughnut-shaped building has a rooftop oculus that collects rainwater from the region’s frequent thunderstorms and repurposes it for a waterfall, helping cool the interior. In 2016, New Orleans’s airport broke its own record for passenger volume, surpassing pre–Hurricane Katrina numbers as travelers returned to the recovering city. But the existing terminal, which dated to the 1950s, was aging and inefficient. In 2019, the city replaced it with the Louis Armstrong New Orleans International ­Airport North Terminal. Based on an initial concept by Pelli Clarke Pelli, headquartered in New Haven, Connecticut, and developed and completed by a joint venture of LEO A DALY’s Washington, D.C., design studio and the New Orleans and Baton Rouge offices of Atkins, the new facility references the city’s Crescent City nickname with its ­crescent-shaped form.

Designed for storm resistance, the long-span spherical roof can handle heavy rainfall, and the curving glazed curtain walls can withstand hurricane-force winds. Sunshades shield the interior from direct sun in summer months. The three-story central atrium includes a “jazz garden” for live performances. The 35-gate terminal comprises three concourses, one of which was added to the project nine months into construction to keep up with rapidly increasing passenger growth.

(Above and below: Steve Lee)

With its islands, beaches, and resorts, the province of Cebu is a popular tourist destination as well as the second-largest metropolitan area in the Philippines. To convey a resort-like feel that calls to mind ocean waves, the new Mactan-Cebu International Airport Terminal 2 has an undulating timber roof made of glulam arches. The arches span 100 feet (30 m), reducing the number of structural columns to give the interior a sense of openness.

Like indigenous Filipino houses, the roof has a steep pitch and low eaves to control solar heat gain and glare. The structure is lightweight enough to withstand earthquakes, yet braced firmly against the region’s frequent typhoons. The exposed glulam timbers convey warmth, as do rattan furniture and check-in counters featuring handwoven lattices. Skylights let in plentiful natural light. Designed by the Hong Kong office of Integrated Design Associates and built in a public/private partnership by the local consortium GMR-Megawide Cebu Airport Corporation, the terminal opened in 2018. In order to accommodate an increasing number of connecting transborder and international passengers at Montreal-Trudeau International Airport, the airport authority, ADM Aéroports de Montréal, created a facility dedicated solely to connecting passengers. The first phase of the building opened in 2019 with 36 inspection kiosks to help passengers swiftly complete the border control process. Because these travelers are just passing through, local firm Jodoin Lamarre Pratte Architectes designed the building to evoke the area in hopes of encouraging travelers to return and spend more time.

The facade’s triangular grid of solids and voids is a reinterpretation of the rocky landscape of the Canadian Shield, the exposed portion of North America’s continental crust. Local and Canadian materials include Atlantic Black granite flooring and birch wood wall cladding. A vegetated green wall helps humidify the air, which is preheated by a solar wall on the building’s south side. Located at the intersection between the transborder and international jet bridges, the building is suspended from the roof over an airside roadway. (Above and below: Jason Mann) Viewed from the exterior, the pleated roof of the long, linear Nelson Airport Terminal building echoes the surrounding mountain ranges. Viewed from the interior, the exposed mass timber roof recalls the surrounding forests where the lumber was grown. Completed in 2019 and designed by Studio Pacific Architecture of Wellington, the terminal replaces an outdated 1975 structure that no longer met building code requirements.

The roof is shaped and pitched to facilitate natural ventilation within the terminal. On the southwest side, lower-level windows draw cooler air into the building. At the center of the building, clerestory windows equipped with glazed louvers bring in daylight and exhaust hot air. On the northwest side, facing the runway, chevron-shaped canopies shield the interiors from the heat of the sun and release hot air from solar chimneys below. The local firm Nordic Office of Architecture designed the original Oslo Airport, which opened in 1998. Nearly two decades later, the firm returned to address rising passenger traffic by reconstructing portions of the existing building, extending the departure and arrivals hall, and adding a new northern pier perpendicular to the original terminal. The additions doubled the existing facility’s capacity without increasing walking distances for passengers.

Like its predecessor, the new pier is supported by a glulam structure and concrete columns, but it has a curving form in contrast to the rest of the terminal. The oak timber cladding from Scandinavian forests, vegetated green walls, and water features extend the nature imagery. High levels of insulation and a tight building envelope conserve energy, along with groundwater energy conservation and heat recovery in the mechanical and ventilation systems. Wintertime snow is gathered and preserved in an attached storage structure for use in cooling during the summer. The expansion opened in 2017. Art evoking the Utah landscape plays an integral role in Salt Lake City International Airport’s new passenger terminal, which replaces outdated midcentury terminals and concourses. The airport brought in artist Gordon Huether, based in Napa, California, to work closely with the architecture firm, the San Francisco office of HOK, to incorporate his art into the design of a new central terminal building and portions of two concourses. The largest installation, The Canyon, runs along the east and west walls of the new terminal, referencing Utah’s slot canyons with wavy tensile membrane fins. A seven-story-high dichroic glass sculpture, The Falls, greets arriving visitors. Even the restrooms feature art.

Throughout, finishes in earth tones like sage and copper recall the western landscape. Floor-to-ceiling glass walls provide views of the nearby Wasatch Mountains and bring in daylight. The linear concourse design also lets planes move to and from gates more efficiently and swiftly. The first phase was completed in 2020. A second phase will involve demolishing and replacing more structures, ultimately tripling the original airport’s passenger capacity to more than 30 million passengers per year.