Toronto’s deep-lake water cooling system stands as an example of the “third wave” of urban energy. Toronto is able to displace 55 megawatts of energy per year from the grid using its Deep Lake Water Cooling system. The system harnesses cold water at the bottom of Lake Ontario to cool hospitals, data centers, educational campuses, and government, commercial, and residential buildings.

As North America’s fourth-most-populous and fastest-growing large city, Toronto is powering through with a robust yet low-carbon expansion of its energy capacity. Using its Deep Lake Water Cooling (DLWC) system, the city is able to displace 55 megawatts of energy per year from the grid—enough to power eight hospitals.

DLWC, the world’s largest lake-powered cooling system, is operated by Toronto-based Enwave Energy Corporation, a fully integrated district energy company, and was launched in 2004 at a cost to the city of C$230 million (US$179 million). With Enwave’s other district energy systems in Toronto, DLWC serves as a prism through which to understand the background and status of district energy generally.

Fernando Carou, manager of renewable energy and net zero development for the city of Toronto, takes the long view of where district energy has come from and where it is headed. He sees today’s district energy as “the third wave of urban energy.” The three waves are as follows:

District energy generated locally is more efficient and less polluting than energy produced in a distant large plant because of a basic principle of physical science: resistance. When electricity passes over a transmission medium like wires, the copper metal of the wires slows the rate of transmission, or “resists” the transmission of electric energy, wasting as much as 60 percent of the energy generated. The Toronto-Dominion Centre, which comprises six towers and a pavilion covered in bronze-tinted glass and black steel, is the largest ensemble of office buildings in Canada and an early adopter of the Deep Lake Water Cooling system. In contrast with centralized energy production and distribution to distant end users, district energy is generated by small local energy producers and used by immediately proximate end users. (Photo credit: David MacMillan)

Not One Size Fits All

District energy comes in many sizes that offer different opportunities to developers. The applicable district could cover just two or more buildings or a large area like the DLWC system service area.

Where the district is small, the real estate developer may directly design and construct the district energy system and thereby have a great deal of control over the system, including the ability to self-generate energy, which is crucial for mission-critical uses like hospitals and data centers. The system is likely to be completely private.

But where the district is large, like the DLWC system service area, the developer has relatively little control over the system, and is thus a district energy system “taker.” In this case, the system is usually public—or operated by a private company like Enwave on behalf of the public. 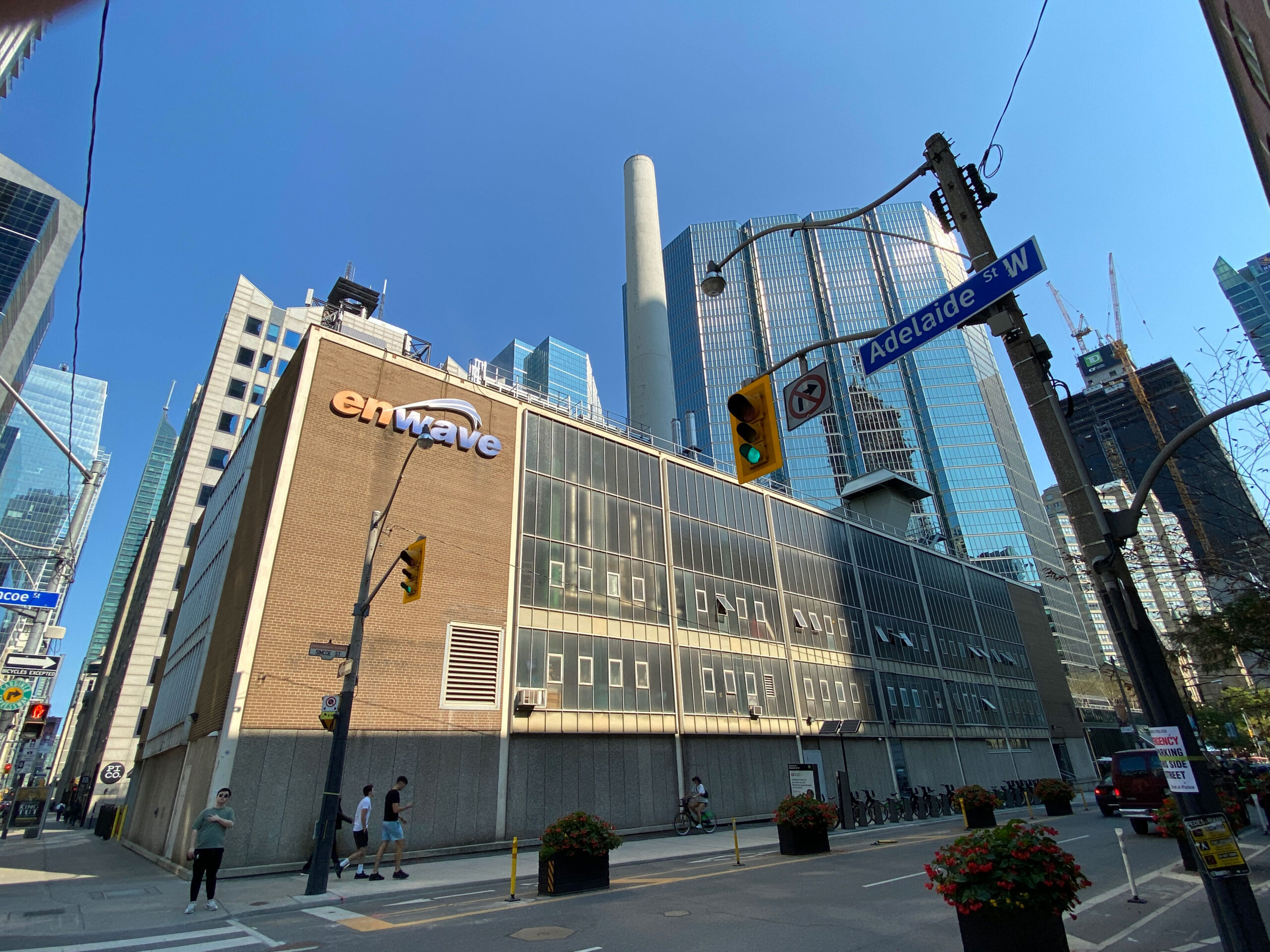 When multiple real estate developers agree that district energy is worth pursuing in their market area, they may wish to band together to lobby the relevant municipality for an effective district energy system.

Although this is much slower than a private process, when the savings of a district energy system are very great, as with DLWC, this confers a significant competitive advantage over other neighborhoods or cities and may be worth the time and cost of pursuing.

Real estate developers, engineers, political leaders, and others banded together to create the DLWC system. As Richard Joy, executive director of ULI Toronto points out, the DLWC system is geologically possible because the underwater shelf extending out from mainland Toronto drops off quickly, making cold, deep water available unusually close to customer buildings. Where the slope of the underwater shelf is relatively gradual, deep-lake water cooling is not possible. The DLWC system provides an outsourced alternative to traditional cooling towers and equipment, saving a major capital and operating cost for large buildings.

Compared to a chiller, the DLWC system can reduce electricity use by about 80 percent. The cooling system is a clean, renewable, and reliable energy source. The DLWC system also reduces water consumption and operating costs, provides more predictable energy costs, and improves resilience.

The system uses three large pipes that run three miles (5 km) into Lake Ontario, to a depth of 272 feet (83 meters). The water there is a constant 39 degrees F (4 degrees C) and is piped to Toronto Water’s filtration plant and then to a pumping station on the lakeshore. There, large heat exchangers transfer thermal energy between the systems: the potable water for the city is minimally heated, while the water supplied to downtown buildings is chilled. After the chilled water has circulated through and cooled the buildings, Enwave recycles the heat, returning the warm water to the pumping station to repeat the process.

Amy Jacobs, senior vice president of commercial operations of Enwave, points out that besides the efficiency of the lake source cooling itself, the district scale of the system enables recapture of waste heat from cooled buildings, which is used for heating purposes. 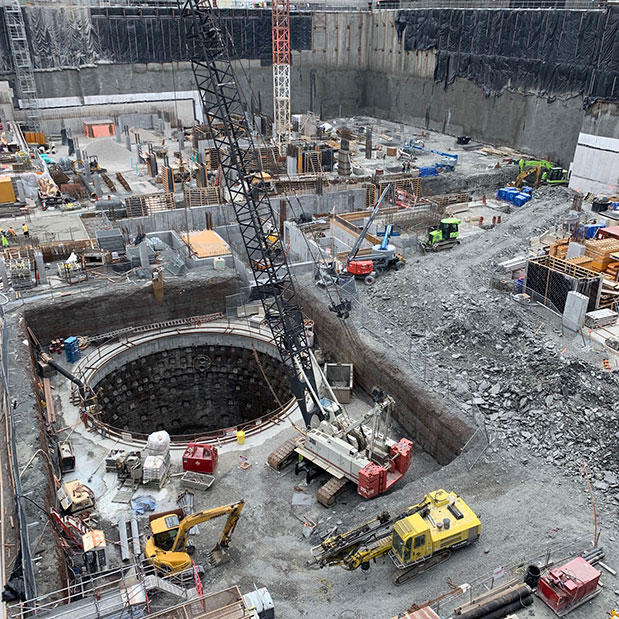 As Joy notes, the DLWC system expansion is closely connected with a large mixed-use development called The Well. Enwave partnered with Riocan Real Estate Investment Trust and Allied REIT to build and operate a thermal “battery” several stories tall underground, beneath the development. Cold lake water is then accumulated at night so that it may then be released in the heat of the day for cooling, adding yet another layer of efficiency.

In addition to the current system expansion, Carou is confident that the city of Toronto and Enwave will undertake future major expansions of DLWC roughly once per decade, commensurate with Toronto’s economic and demographic growth, and the capacity to finance that growth.

By 2050, Toronto’s goal is to have 30 percent of its floor space—all commercial space, not just city building space—connected to low-carbon heating and cooling. 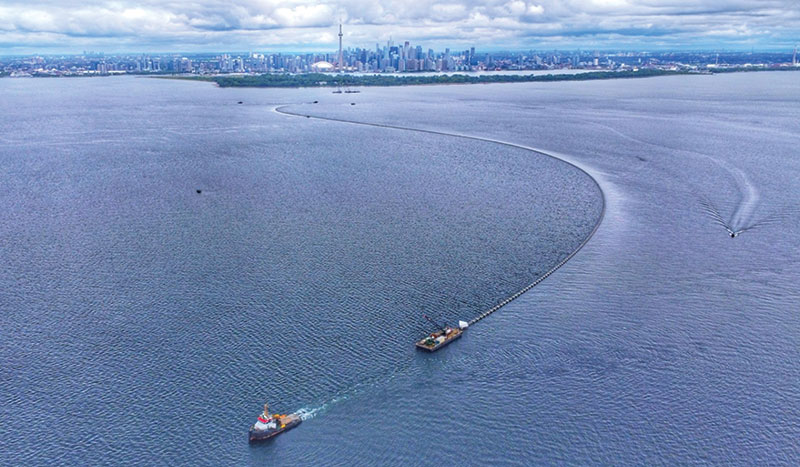 A recent image of the new intake pipe from the DLWC expansion project being pulled out into Lake Ontario and sunk. (Enwave)

Since first being developed a century ago, district energy has been applied to a growing range of utility infrastructure, including combined heat and power (CHP), conventional district cooling other than DLWC, and district heating. In addition to DLWC, Enwave operates all these types of district energy systems in Greater Toronto—a veritable laboratory of district energy.

CHP uses natural gas to create two products—heat and power. Traditional plants convert only 40 percent of fuel energy into electricity, while 60 percent of energy generated is wasted as heat and vented off.

Having a CHP unit as part of a district system, a company like Enwave can distribute the heat produced to its customers, as well as use the power. CHP is thus generally a highly efficient form of district energy.

In a CHP plant, waste heat is recovered to create steam, hot water, or chilled water to heat or cool a surrounding network of district energy buildings. By using the thermal byproduct of electricity generation, CHP plants regularly achieve fuel efficiencies of 70 to 80 percent—much greater than the typical 40 percent rate for pure electricity generation.

Because thermal energy cannot be transmitted long distances like electricity, the main constraint on CHP is that the generation of the thermal byproduct must occur in a location near end users. Thus, district energy is an attractive solution for dense downtown areas, college campuses, or industrial entities that concentrate demand for thermal energy.

But a CHP system like Enwave’s, which is connected to the grid and had a total capacity of four megawatts, is generally unattractive for less-concentrated communities, particularly in places with relatively dirty electricity grids rather than the clean grids of Toronto. By dramatically increasing power plant efficiency, CHP reduces fuel costs, carbon emissions, and pollution. CHP district energy systems expand the potential thermal load, reduce the requirement for capital investment, and provide economies of scale. As noted, Toronto’s DLWC system is extremely efficient, but DLWC has a maximum capacity, like any utility asset. Thus, in addition to the DLWC, Enwave operates significant conventional district cooling assets.

In the absence of the availability of DLWC in Toronto or elsewhere, district cooling is an efficient way to cool a network of buildings. Central cooling plants house large, efficient equipment that produces chilled water that flows through insulated piping into customer buildings through a heat exchanger, absorbing heat from the building space.

District heating, the original form of district energy, is an efficient way to heat a network of buildings. Unlike CHP, district heating produces only heat. Steam or hot water produced at the central heating plant is transmitted through insulated thermal piping into customer buildings, and the resulting thermal energy is transferred to the building’s heating system.

By aggregating heating demand among a network of buildings, district heating creates an economy of scale that drives efficiency, balances electricity loads, and reduces fuel costs.

Enwave has operated a water heating service in Toronto for just a few years, Jacobs says, but has operated a hot water service in Charlottetown on Prince Edward Island for more than 25 years. This legacy hydrocarbon-fueled system is currently supplemented by low-carbon sources, such as heat pumps.

The Future of District Energy

In Philadelphia, for example, ULI member Alan Razak, principal of real estate firm AR Spruce, is organizing an Advisory Services panel to study use of the Philadelphia Gas Works (PGW) right-of-way to place ground-source heat pumps underground near individual homes. Retrofitting in this way can benefit utilities as well as energy consumers: the number of PGW gas customers is steadily declining so the company will have decreasing ability to bear the cost of operating its gas system but may be able to recoup at least some of its costs through placement of heat pumps.

As energy needs have grown and availability of renewable energy has become more widespread—both of which emphatically apply in Toronto—real estate developers have rediscovered district energy in its third-wave renewable form and are using it in appropriate projects.

In saving energy simply by localizing the place of its generation—conservation by localization—district energy goes far toward enabling the real estate industry to manage the energy transition.

Learn more about innovative developments in Toronto at the 2023 ULI Spring Meeting.