A midyear survey of home sales rates at the 50 top-selling master-planned communities (MPCs) in the United States indicates the potential for a 10 percent increase by the end of 2019 compared with last year. That exceeds expectations, according to RCLCO’s report, Top-Selling Master-Planned Communities Mid-Year 2019. The listed communities, on average, are experiencing 3 percent growth in sales over midyear 2018.

An MPC differentiates itself from a suburban subdivision in one core aspect: its focus on fostering a sense of community, both in terms of housing options—including modest to large properties to meet various price points—and lifestyle amenities. These communities may offer the neighborhood secured access to recreational amenities, such as playgrounds, parks, or restaurants; educational opportunities, including elementary, middle, or high schools and daycare facilities; and neighborhood shopping and services, such as stores, large shopping centers, and businesses or employment centers to complement the residential neighborhoods.

Every year since 1994, RCLCO has conducted a national survey identifying the top-selling MPCs through a search of high-performing communities in each state. The company says this initiative exists not only as a way to commend the most successful communities in the United States, but also as a tool for monitoring the overall health of the for-sale housing industry, a means of locating markets with the most significant residential momentum, a process for highlighting the trends affecting communities large and small, and a medium through which to learn development best practices and pass along lessons learned from the MPCs that have pioneered their way into the top ranks.

The ranking of 2019’s midyear top-selling MPCs is based on total net new home sales reported by each community. To be considered, MPCs must include a variety of housing types, sizes, and prices, with shared common space, amenities, and a vital public realm, RCLCO states. The most resilient MPCs, according to the report, have flexible master plans that are environmentally sensitive and market responsive, and nurture the lifestyles of their residents.

California, Florida, and Texas are heavily represented in the RCLCO rankings, accounting for 66 percent of total sales among the top 50 communities. Other states account for the remaining 34 percent of sales, a smaller share than at midyear 2018.

As it did last year, Florida accounts for a majority of the nation’s top-selling communities. The Villages in Florida leads the list of top sellers, with about 1,000 net new home sales reported in the first half of the year, the RCLCO report says. The Villages is followed by Sarasota’s Lakewood Ranch at 824 sales and West Villages at 679 sales. These three communities represent 42 percent of the sales from RCLCO’s top 10 MPCs and almost 55 percent of the sales from the 11 Florida communities appearing in the top 50.

Texas accounts for 21 percent of sales in the top 50 communities that made the RCLCO list. The top-selling community in Texas this year is Austin’s Sonterra, with 455 new home sales in the first half of 2019, thereby claiming the ninth spot on the list. Following closely behind are Houston’s Bridgeland, Harmony, Sienna, and Cross Creek Ranch communities.

With eight communities making this year’s list, California represents 15 percent of the total sales of the top 50 MPCs. Following closely behind is Arizona at 11 percent and Nevada at 10 percent of total sales; this is in part due to the sales figures at the Eastmark community in Mesa, Arizona, and the Summerlin community in Las Vegas.

Top-selling communities offer appropriately priced and designed residential product types and lifestyle amenities and are typically proactive in identifying the needs and wants of consumers in the market—segmenting communities by variables including age, income, and household. While baby boomers have purchasing power and remain an important market for new-home sales, new household growth is younger and increasingly diverse, RCLCO notes in a recent advisory, “Disruptive Demographics: Housing Production and Demographic Reality Are Moving in Different Directions.” 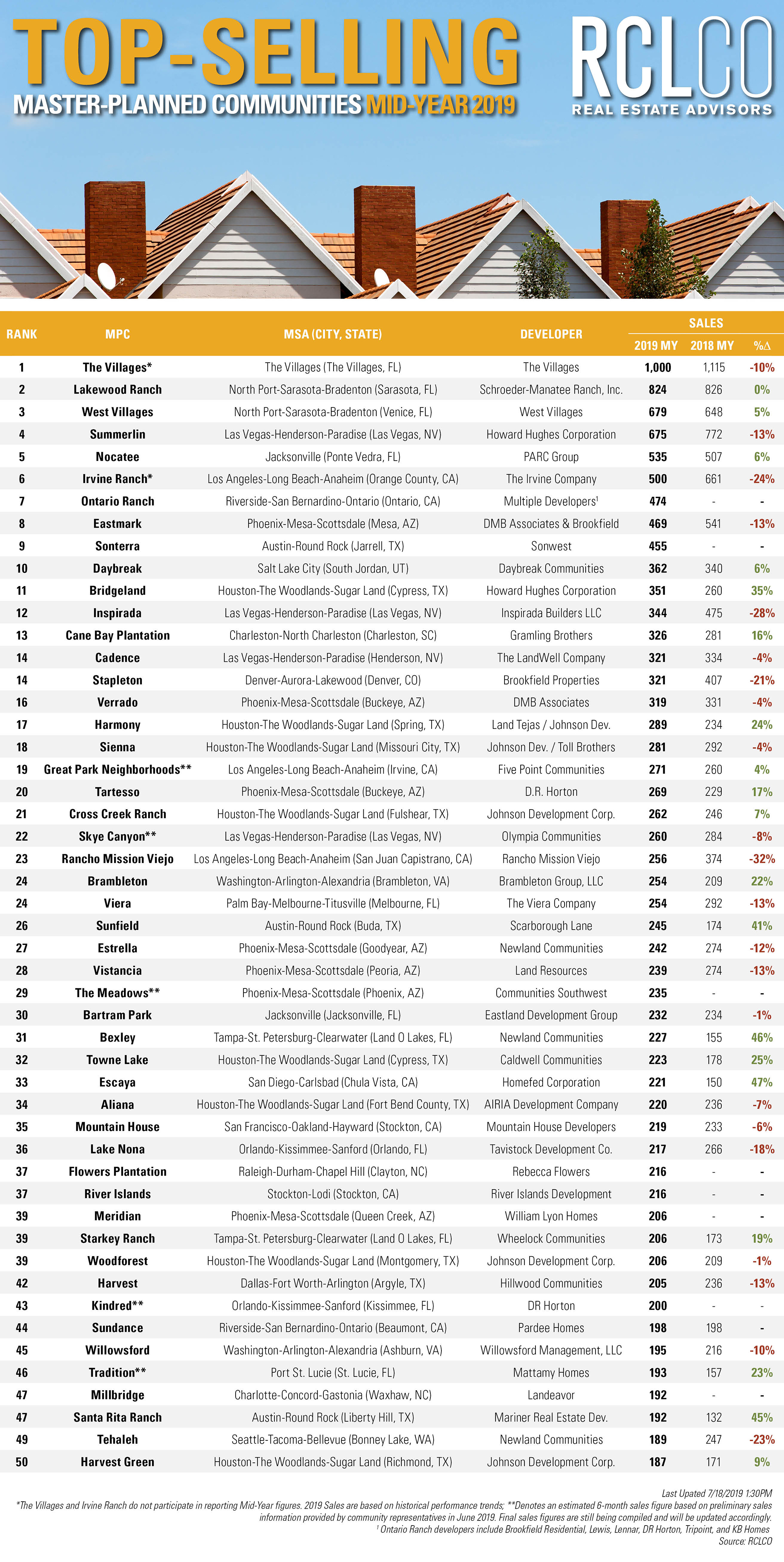