The State of the Nation’s Housing 2017 report, published by the Joint Center for Housing Studies (JCHS) of Harvard University, makes a solid case that the U.S. housing market is firmly on the road to recovery. Construction starts are rising, home prices are improving, and financial distress among homeowners is on the decline. Yet the report also shines a spotlight on the problems still in play, namely insufficient supply and rising costs that are creating challenges for both renters and homebuyers. 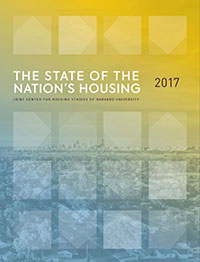 One key finding is that nominal home prices have rebounded. “The reason that is important is because many people who bought at the peak or refinanced at the peak are no longer underwater, and that is an important landmark for the market,” says Chris Herbert, JCHS managing director. The number of homeowners who owe lenders more than their home is worth dropped from a high of 12.1 million in 2011 to 3.2 million at the end of 2016.

“Another key way in which the market is getting back to normal is the growth of households, which was anemic in the years after the bust,” says Herbert. Household growth has climbed steadily from post-recession lows. Between 960,000 and 1.2 million households net new households were added annually from 2013 to 2015, a dramatic increase from the 540,000 to 720,000 average in 2007 to 2009.

On the negative side, extremely tight supplies of both for-sale and rental housing are pushing up housing costs and adding to ongoing concerns about affordability. Even though construction is up for the seventh year in a row, with single-family housing starts reaching 1.17 million units in 2016, that is still very low by historical standards. “Back in previous recessions, that would have been near the bottom of that recession,” says Herbert. The number of housing completions between 2007 and 2016 totaled just 8.98 million units, far below the 15 million–plus average for every ten-year period from the 1970s through the 1990s.

In the for-sale market, the number of months of supply available is 3.6 months, marking the fourth-consecutive year that supplies held below 6.0 months, the conventional measure of a balanced market. And despite the recent burst of multifamily construction, the national rental vacancy rate hit a 30-year low of 6.9 percent in 2016.

“The country’s supply of for-sale and rental units combined is probably 3 to 4 million units short of current demand,” says Stockton Williams, executive director of ULI’s Terwilliger Center for Housing. Compounding the problem of the growing affordability challenge is an insufficient supply of housing to meet demand in places where people want to live, he says.

Affordability remains a key issue in the rental market as rent increases continued to outpace inflation in most markets. Even with multifamily construction at its highest level in two decades, additions to the rental supply have not kept pace with surging demand, and there is a bigger mismatch emerging in the market, with the number of low-income renters far outstripping the number of available units at the lowest end of the market.

New multifamily construction has been concentrated on high-end and luxury rental property. The number of units renting for $2,000 per month or more increased 97 percent between 2005 and 2015, while the new supply of units renting for less than $800 actually declined by 2 percent—260,000 units—during that period.

Moderately priced workforce housing also is struggling with a lack of new supply. The middle-income tenants, generally speaking, are not being served by new construction, notes Scott Bassin, an executive vice president/head of multifamily housing at PNC Real Estate and a member of ULI’s Multifamily Council.

The high cost of building apartments today is contributing to the shortage of medium-priced and lower-cost affordable housing. Even constructing units at cost in a metro area such as Washington, D.C., today would result in rents of $3.50 to $4.25 per square foot ($37.67–$45.75 per sq m), notes Robert Kettler, chairman and chief executive officer at Kettler, a multifamily developer based in McLean, Virginia. That is the equivalent of $2,800 to $3,400 for an 800-square-foot (74 sq m) unit.

One way developers are trying to offset high costs and offer lower rents is by building smaller units. Micro-unit apartments are part of the supply mix in the most expensive markets, but still constitute a tiny share of new product coming on line and are almost all aimed at upper-tier renters, notes Williams. Interesting innovation is also happening on the production side, with modular, prefabricated construction and use of unconventional materials. So far, that is occurring at a small scale, but there is considerable potential for significant disruption in the years ahead, he adds.

For example, Kettler has a new home model that averages 625 square feet (58 sq m), compared with its traditional 950-square-foot (88 sq m) model. The company also is testing prefab components in its building structure as a means to reduce construction costs. “So, we are doing things to mitigate and bring costs down more towards people that earn in the $45,000 to $85,000 range,” he says.

One common criticism is that multifamily developers are building too much luxury housing. That may be true in some markets, but many metro areas are still seeing strong demand for those high-end properties, notes Herbert. The real issue is how to expand supply along the entire cost spectrum, he adds. That will be increasingly important amid sustained demand for rental housing.

The share of households that rent their home is at a 50-year high of 37 percent, accounting for 43.3 million households, the report says. There are signs that the homeownership rate, which has been falling steadily since the Great Recession, is now stabilizing. However, the future course of homeownership will also be shaped by how affordable local home prices are for typical renters, according to the report.