The Dodge Momentum Index moved 4.1 percent higher in September to 143.6 from the revised August reading of 137.9. The gain in September was due entirely to an 8.9 percent increase in the commercial component, while the institutional component fell 4.8 percent.

For the third quarter, the overall Momentum Index averaged 140.1, a scant increase of 0.7 percent from its average in the previous quarter. Compared with the third quarter of 2018, however, the Momentum Index is 8.6 percent lower, with the commercial component 3.7 percent lower than a year ago and the institutional component down 16.2 percent. While the dollar volume of projects in planning is certainly lower than it was a year ago, the index has moved more sideways than downward over the last two quarters. 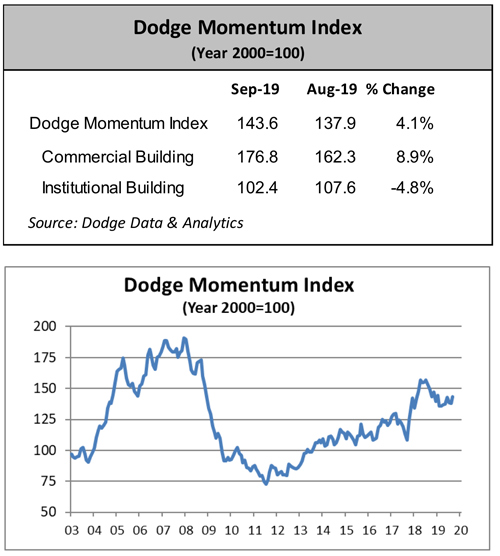 In September, 15 projects each with a value of $100 million or more entered planning. The leading commercial projects were a $400 million consolidated rental car facility at Newark International Airport in Newark, New Jersey, and a $163 million embassy renovation in Arlington County, Virginia. The leading institutional projects were a $235 million dormitory project in Irvine, California, and the $180 million Jefferson Regional Medical Center in Pine Bluff, Arkansas.