The isolation brought on by the COVID-19 pandemic spotlighted the need to create more outdoor spaces in which people could stroll and gather with friends and family, enjoy nature, or just get out of the house after being on Zoom meetings all day. In many cases, that means tearing up asphalt or adapting existing parks or other facilities to add trees, paths, lawns, gardens, and areas in which to socialize and recharge.

The following 10 projects—all completed during the past five years—include an art deco dairy turned into a mixed-use complex, a gravel-mining pit repurposed to filter stormwater runoff, a roundabout planted with trees and laced with pedestrian and bike paths, a privately owned public “beach” that lifts pedestrians and bicyclists above the flood zone, and an airport runway–turned–linear park. With global warming sending desert temperatures soaring, Arizona State University replaced a portion of roadway with a shaded pedestrian mall at the heart of campus. Located alongside a new net-zero-energy student pavilion, the Orange Mall comprises garden spaces, learning laboratories for students, and bioswales equipped with terraced steps that double as seating where students can hang out. Wide steel pedestrian bridges cross the basins, which are linked by surface runnels, putting stormwater management on display and keeping neighboring buildings from flooding during rainy weather.

A water feature made of brass pipes arranged like the stalactites of Arizona’s caves filters air-conditioning condensate into the low-water landscaping and provides evaporative cooling for the area. Drought-tolerant date palms provide shade for events and informal gatherings held in the multiuse Palm Grove, lowering pavement temperatures by more than 20 degrees Fahrenheit. Opened in 2017, Orange Mall was designed by Phoenix-based Colwell Shelor Landscape Architecture. In 2008, a tornado struck the Atlanta Dairies, an abandoned art deco complex that had once housed a farmers’ cooperative founded in the 1940s. Local developer Paces Properties purchased the dilapidated 10-acre (4 ha) brownfield site and converted it to house a mix of uses. Perkins & Will’s Atlanta studio renovated the structure, restored the distinctive streamline moderne facade, and updated existing catwalks to link the new offices, restaurants, shops, plazas, and music venue. The former loading yard became a terraced landscape that serves as a community gathering center.

Georgia’s state historic preservation office required the proportion of hardscape to softscape to match the original 1949 design. The design team specified only trees and plants native to the Piedmont region of the U.S. Southeast, bringing vegetation to nearly 60 percent of the site. A new stormwater system with bioswales and systems for water retention and infiltration handles runoff from surrounding structures. Concrete salvaged from the original complex fills gabion retaining walls, and reclaimed steel beams serve as seating. The complex opened in 2019. In the 1960s, a portion of Seattle’s Elliott Bay was filled with construction debris and became home to pier shed buildings and eventually a biopharmaceutical campus. After Expedia purchased the 40-acre (16 ha) site for its headquarters, San Francisco–based Surfacedesign revamped 2.6 acres (1 ha) at the campus’s waterfront edge to create a landscape that is open to the public, enhances the pedestrian and bicycle experience on the Elliott Bay Trail, and hosts gatherings for workers and visitors alike.

The existing stretch of trail was prone to flooding and forced cyclists to navigate a dangerous blind turn. Surfacedesign separated walkers from bikers with two expanded paths, smoothing the sharp curve and elevating both segments to accommodate rising sea levels. Bioretention areas treat stormwater runoff and create wildlife habitat areas. A terraced overlook offers views of Puget Sound, Mount Rainier, and Seattle’s skyline. Driftwood and reclaimed boulders serve as seating, scattered throughout the native and coastal plantings. The Beach at Expedia Group was completed in 2019. Clippership Wharf replaces two abandoned wharves along Boston’s waterfront with 475 apartments and condominiums in four buildings designed to meet the city’s Climate Ready Boston initiative. All dwelling units are placed above the 100-year flood level, and flood barriers can deploy to protect ground-floor retail spaces, entryways, and parking. The Architectural Team of Chelsea, Massachusetts, designed the complex for the local office of Lendlease. Local landscape architect Halvorson | Tighe & Bond Studio removed a portion of existing seawall to make way for a terraced shoreline with salt marsh grasses and reclaimed granite that dissipate waves and storm surges.

A retention area accommodates rising seawater and filters stormwater before it reaches the harbor. The site includes wildlife habitats, a stretch of the city’s Harborwalk linear park, a dog park, an amphitheater, sculptures, and a kayak launch. A raised wooden boardwalk provides safe access along the waterfront. The restored shoreline affords views through the site and restores public access to the water. Clippership Wharf was completed in 2021. In 2010, the city of Calgary acquired a former gravel-mining pit along the Bow River with the goal of restoring the natural habitat. The restoration also granted the opportunity to filter rain and snow runoff from more than 4,200 acres (1,700 ha) of upstream residential areas. The team of Calgary-based O2 Planning & Design, Sans façon for Watershed+, and Source2Source, and the Calgary office of AECOM made the treatment of water visible as it moves toward the river.
Stormwater first passes into a clarifying pond, then flows through streams to marshes, wet meadows, riparian areas, and a restored outlet stream. The process removes half of all sediment. Walking and cycling trails curve through the park, linked by elevated, crisscrossing boardwalks. Native species include dogwood and willow trees. The park opened in 2019. Concrete boardwalks allow people to stroll along the wetlands and connect to trails within Bridgeland as well as regional trails and nearby communities. Interpretive signage gives information about the park’s ecosystems and sustainable strategies. Overland Partners of San Antonio, Texas, wove a number of structures into the landscape, such as a birding tower, a boathouse, and a central pavilion with an event lawn and infrastructure for food trucks and vendors. The park also offers a playground and an amphitheater. Howard Hughes Corporation, headquartered in The Woodlands, Texas, was the developer for the park, completed in 2018. 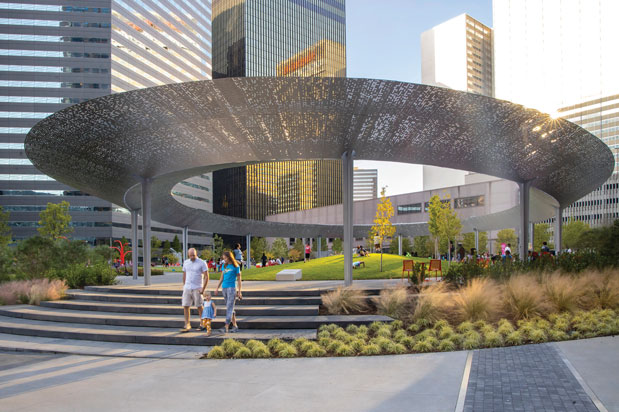 With the help of a public/private partnership between the city of Dallas and the nonprofit Parks for Downtown Dallas foundation, a parking lot ringed by high-rises has been transformed into a 3.7-acre (1.5 ha) park. The SWA Group’s Dallas office introduced a grade change to provide a sense of separation from the streets around it. A curving limestone seat wall winds throughout the park, which includes a low-water native grass lawn, a playground, 144 new trees, and bike stations.

At the southwest corner, local design studio HKS LINE (Laboratory for INtensive Exploration) created an elliptical pavilion of stainless steel, serving as a beacon and embodying the site’s earlier railroad history with Morse Code perforations spelling out local stops along the Texas and Pacific Railroad. Removal of a stretch of thoroughfare allowed the site to connect to a shady nearby grove of 23 mature live oaks. The park opened in 2019. The roundabout at Sankt Kjelds Square had long been a gray asphalt landscape. As part of a climate initiative, the municipality of Copenhagen decided to revamp the square and Bryggervangen, one of the roads leading to the square, to relieve the overloaded sewer system. Local landscape architecture firm SLA replaced paving with greenery, including more than 580 new trees with a variety of local species such as plum and walnut trees. Trees and rain gardens capture and filter stormwater, with any excess piped to the nearby Port of Copenhagen.

Paths for pedestrians and bicyclists snake through the vegetation. Outdoor seating areas and benches give people spaces where they can socialize and relax. Large, overturned dead trees serve as naturally appealing climbing structures for children as well as providing homes and sustenance for insects and other wildlife. The park was completed in 2019. A decade ago, Waterloo Park closed for the construction of an underground tunnel that would redirect stormwater from the city to Lady Bird Lake and keep floods from eroding the creek. The municipality and the local nonprofit organization Waterloo Greenway Conservancy teamed up to restore the rundown park, which reopened in 2021 as the first phase of the restoration of the Waterloo Greenway. The 11-acre (4.5 ha) Waterloo Park includes a 5,000-seat amphitheater, a place for food trucks, gardens, walkways, a playground, and a restored creek. It also has more than 500 new trees and eight large, transplanted live oaks. Once the runway for Longhua Airport, Xuhui Runway Park now serves as an urban amenity and handles stormwater for new mixed-use development rising in this formerly industrial area along the Huangpu River. Sasaki’s Boston and Shanghai offices collaborated to embody the site’s history in the new park, salvaging concrete runway panels for the main pedestrian spine and adding light poles that reference the form of airplane wings.

Completed in 2020 for Shanghai Xuhui Waterfront Development Investment Construction Co., the park’s individual spaces echo the runway’s linear form, with different materials, topographies, and uses lending variety. Overlooks give pedestrians and bicyclists a chance to observe the park from above; a sunken garden links neighboring areas to the park’s transit station. Restaurants, water features, a playground, and a multipurpose lawn draw activity, and gardens and a birdwatching grove provide spaces for people to reflect. Plant species are native to the Yangtze River Delta. A rain garden and constructed wetland filter stormwater for reuse in fountains and the irrigation system.