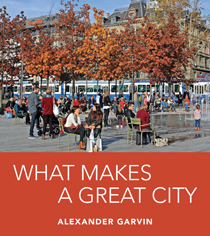 Alexander Garvin is president and chief executive officer of AGA Public Realm Strategies, a planning and design firm in New York City. His firm prepared the initial master plan for the Atlanta BeltLine, a 23-mile (37 km) landscaped trail encircling the city that connects neighborhoods, parks, and transit. An architect, city planner, and Yale professor, he is the author of The American City: What Works and What Doesn’t, now in its third edition.

In writing this book, Garvin went on a quest to discover what makes cities great. He found that the secret to urban greatness stems from management of the streets, squares, parks, and special places that make up the “public realm.” To maintain greatness, cities must not only maintain but also “continually alter their public realm to meet the changing needs of their occupants.”

Bilbao, Spain, opened the author’s eyes. Thirty years ago, the city was an “economic basket case” due to industrial decline and river flooding. Most observers credit Frank Gehry’s iconic Bilbao Guggenheim Museum with dramatic 21st-century renaissance. But the museum was only the final accomplishment, building on an earlier strategy that relocated port facilities, redeveloped the riverfront, invested in public transportation, added a promenade, and improved public squares and parks.

The city-building ideas of Ed Bacon and Jane Jacobs are central to Garvin’s recommendations. Like them, he insists that a great public realm should be open to anybody, offer something for everybody, attract and retain market demand, provide a framework for successful urbanization, sustain a habitable environment, and nurture and support a civil society. His philosophy is a rich blend of democracy, urban design, and real estate development.

Bryant Park in New York City exemplifies these characteristics of a great public realm. Adjacent to the New York Public Library at Fifth Avenue and 42nd Street, Bryant Park had become a neglected hangout for dope dealers and muggers. During the 1980s, some 900 arrests per year were made in the park. To turn the park around, adjacent businesses and property owners created a nonprofit corporation with a business improvement district (BID) funded by a real estate tax surcharge. By 2013 the corporation’s budget had grown to $7.9 million, spent for sanitation, security, public events, and capital projects. Reported crimes had fallen to 17 incidents of larceny. The public-realm design and management improvements generated additional demand for retail stores and offices surrounding the park, with office rent increases outstripping those of Rockefeller Center. Thousands of people now use the park for daily activities year round.

Le Corbusier’s vision of the City of Tomorrow—skyscrapers lined up in vast green spaces without people or a public realm—is Garvin’s straw man. His counter vision is the city of today animated by dynamic places for people. These are places as historic as Siena, Italy’s Piazza del Campo and as contemporary as Post Oak Boulevard in the Uptown district of Houston, now the 17th largest business district in the United States.

In all of these places, the public realm is accessible and easy to use as in Denver’s 16th Street area and the squares of Savannah, Georgia. It has a place for everything as in New York’s Central Park and Rome’s Piazza Navona. It creates a habitable environment, as in Boston’s Emerald Necklace and the Chicago Lakeshore. It supports a civil society, as in the streets of Copenhagen and Moscow’s Red Square. It shapes everyday life, as in London’s squares and Madrid’s refurbished thoroughfares. It is regularly refurbished, as in Paris’s Place des Vosges and San Antonio’s River Walk.

The text overflows with similar public-realm stories from 35 cities in the United States and Europe. These include both cities that one would expect, such as Paris, New York, and London, but also ones whose planning has been criticized, such as Houston and Atlanta. However, one will not find any Asian, Middle Eastern, or South American cities because Garvin believed he did not have sufficient understanding of their historic cultures.

What makes this book special are Garvin’s insights and opinions from his personal explorations of the great cities that he visited. The book is a visual delight, with 252 illustrations including 33 maps and 191 of the author’s own color photographs. The cases come to life with vivid descriptions of their organizational, planning, and design moves, as well as complete rundowns of the sizes and types of resulting structures. Unlike some urban design books, this one is well aware of the market impacts of public realm investments.

Garvin concludes that people are what make a city great. The public realm may be what initially attracts them, but a time comes when without adjustments a city will no longer keep them there. So people make the changes they need. He writes, “A great city, unlike a great painting . . . is not an exquisite, completed artifact.”