The following is a ULI member–only excerpt from Making It in Real Estate, available for purchase at the ULI Bookstore.

In mid-December 2018, the S&P 500 was down 2.33 percent for the year. Like a dead rat in the basement, everyone could smell the next recession, everyone knew it was coming, but no one knew when. Nobody. The clever pundits gave its commencement the same wide berth they would accord that moldering rat. One acquaintance, however, rushed in where economists feared to tread and called it, proclaiming March 2020 as the next recession’s kickoff. 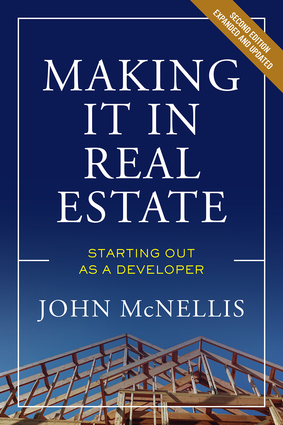 As it happened, he was right. I thought it might be useful to consider how a real estate professional might survive a financial winter.

As truisms go, “Now is always the right time to get into real estate” isn’t bad. It has a nice ring to it; it even makes some sense. But there are better and worse times to ditch your day job for the joys of working without a net.

Today is one of those worse times. With the economy having baked longer than one of my mother’s unfortunate Christmas hams, the percentage play would be to keep your paycheck over the next several years. The time to BASE jump is at the depth of the recession—when you’re closer to the ground—not the week before it starts.

Whether you own a single duplex or a portfolio you take your shoes off to count, ask yourself a simple question: should I sell before the snow flies? Benjamin Franklin observed, “There are three faithful friends—an old wife, an old dog, and ready money.” It takes decades to earn an old spouse, but you can achieve ready money with one quick sale. What should you sell? Your sitting ducks—your projects leased at top-of-market rents, those rented to marginal tenants, and those most susceptible to future competition (i.e., located where land is cheap and zoning codes broken more often than not). And your overleveraged properties. What happens to your project if commercial values plunge 20 percent or more (they tanked 40 percent in the Great Recession) and you need to refinance in the next five years? Would you have any equity left? Would you be able to refinance at all?

By year-end 2018, we had sold five small, single-tenant properties; were in escrow to sell two more; and were dickering with a potential buyer on an eighth. We had no need to sell any of these properties; rather, we thought it was a good time to harvest profits and deploy the cash elsewhere. Against this wave of selling, we traded several of these properties into one much larger asset—a well-located, supermarket-anchored shopping center.

How did we use the cash that didn’t go into the trade? Simple: we paid down debt and, in one case, bought out an equity partner. Our company goal has always been to carry as little debt as possible at a fixed interest rate with the longest term we can obtain. Yes, this strategy is too conservative in good times and acts like a drag chute on new deals, and, yes, you can feel dumb when everyone else is doing five deals to your one. But you will feel much smarter, if not downright smug, when the recession deep-freezes the markets and your bankers will still buy you lunch.

These suggestions are easy enough to swallow. Staying put is a piece of cake, selling can be fun, and repaying debt is kind of like going to Sunday Mass: it can be a little painful, but you feel better afterward.

Harder to accept is this: if you’re not already under construction, reevaluate your project and ask yourself whether it still makes sense. If your numbers look skinny, sell it or mothball it. Newton’s first law of motion—objects in motion tend to stay in motion—has claimed many victims; you have no wish to be one.

Inertia also drives a world of bad deals. You’re halfway through your permitting process when you notice the first frost on your pro forma—leasing has slowed, lenders are edgy, and contractors insouciant—but you push on with lower pre-leasing and perhaps a second-tier, more expensive lender.

And then, if you somehow missed the news beforehand, you discover just how much construction costs have soared in the last couple of years. Yet you persist, marching down the aisle, telling yourself that the project’s financials will look better on completion. They won’t.

One major apartment builder in Northern California told me that construction costs here are rising 1 percent a month (yes, 12 percent a year) and that if you factor in the rental concessions his company is now giving away, his company is not meeting its targeted returns on investment. He also said that some smaller developers are already giving up the ghost on their new apartment projects, irretrievably buried beneath the preferred returns due their financial partners, destined to make nothing on their developments.

The strategies that work so well in a bull market can take you down in a recession. When it freezes, animals adapt. Bears hibernate, birds fly south, and bees live off their summer honey. Time to think about adapting.

JOHN McNELLIS has been a member of ULI since 1984. He currently serves on the Small-Scale Developer Council’s Black Flight.