A survey conducted this spring by the ULI Curtis Infrastructure Initiative found that while ULI members disagree about what exactly constitutes infrastructure, there is broad agreement that infrastructure creates the framework to enable real estate development, ensure economic development and housing opportunities, and provide connections for diverse communities. Asked to cite their top priority for infrastructure investment, members most often cited the stock of affordable housing.

The ULI Member Global Infrastructure Survey was conducted April 20 to May 17 to gain a better understanding of how ULI members perceive the current state of global infrastructure and which elements of infrastructure should be prioritized for investment in the years ahead. It received responses from 338 ULI members worldwide, with 232 responses from the United States and 106 globally representing the fields of real estate development (28 percent), real estate services (22 percent), design and planning (20 percent), and the public sector and policymakers (17 percent), as well as other membership segments including retirees and students. 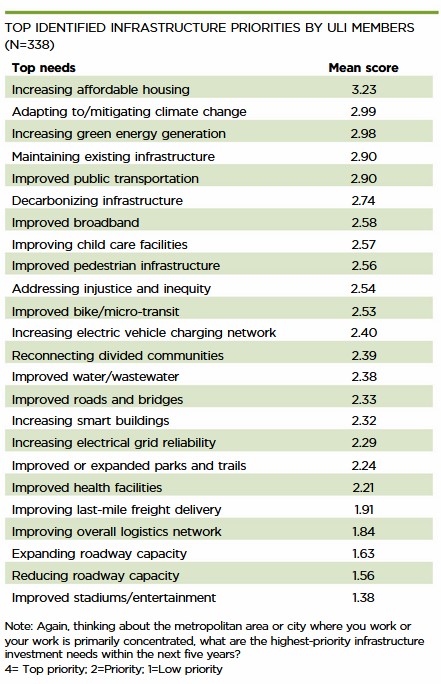 Asked to rank the quality of various elements of infrastructure, ULI members gave the highest ratings to colleges and universities, stadiums and entertainment venues, and private health facilities. Receiving the lowest scores were available residential (subsidized, income-qualified, or social housing), the electric vehicle charging network, community centers and facilities, and public transportation. The quality of available for-sale and rental housing, beyond just affordable options, also was rated as less than adequate.

ULI members outside the United States rated the quality of infrastructure in their own metropolitan area as being higher than those members who work primarily in the United States. In particular, U.S. members said the quality of public transportation (bus, subway, and rail), child care and preschool services, and roads and bridges is poor, whereas their global counterparts all rated these infrastructure categories as at least adequate.

Asked to identify infrastructure priorities for investment in the metropolitan area where they primarily work, respondents globally overwhelmingly (66 percent) cited increasing the stock of affordable housing. That was followed by adapting to and mitigating climate change, increasing renewable and green energy generation, maintaining existing infrastructure, and improving public transportation. Lower priority was assigned to improving stadiums and entertainment venues, reducing and expanding roadway capacity, and improving the overall logistics network.

A striking difference emerged between the responses of U.S. and global members to this question. U.S. members rated maintenance of existing infrastructure as a significantly higher priority than did their global counterparts—placing it after only affordable housing. These two were followed in U.S. responses by increasing renewable and green energy generation, adapting to and mitigating climate change, improving public transportation, and decarbonizing existing and new infrastructure.In contrast, the next five priorities for global members after affordable housing were adapting to and mitigating climate change, increasing renewable and green energy generation, decarbonizing existing and new infrastructure, improving public transportation, and improving bicycle and microtransit infrastructure. 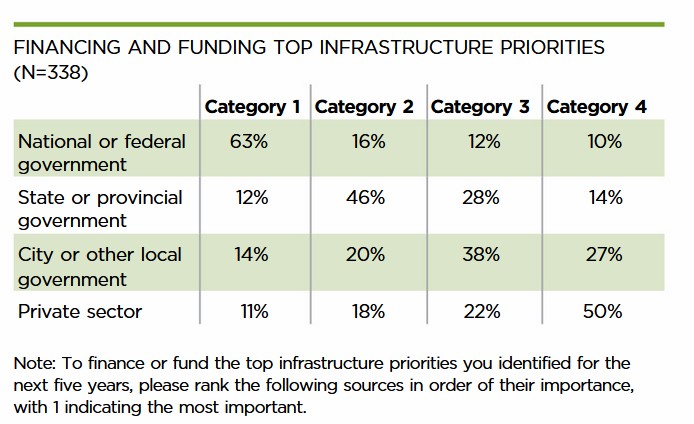 This may speak to the importance of government—at all levels—playing a leadership role in financing and funding investments that provide a public good but that might not offer a return on investment within a period typical for market-driven transactions. Examples would be building market-rate housing versus subsidized housing, or an internal street grid for a real estate development versus a regional system for mobility. Respondents also noted the need for federal investment prompted by local governments having limited capacity for new spending.

Housing affordability, changes as a result of COVID-19 such as work from home, and climate change are the primary real estate trends that will influence infrastructure investment in the next five years, survey respondents said. Other frequently mentioned trends were addressing racial and social inequities, ­managing growth in a way that creates 15- to 20-minute neighborhoods, and responding to the impact of local and national politics.

This work by the Curtis Infrastructure Initiative is intended to build a movement focused on the importance of infrastructure to facilitate effective investments that enable best practices in real estate development and land use—a movement that relies on the engagement of ULI members.

The sooner that ULI members get involved to make a difference, “the more fulfilled they will feel not only with their involvement with ULI, but also with their own firms in terms of how they start looking at every project they do,” James J. Curtis III said as part of the 2016 ULI NEXT Global Visionary Video Series. “They understand every choice makes a difference.”

The Curtis Infrastructure Initiative was launched in October 2020 through a generous donation from the estate of Curtis, a ULI Life Trustee who believed that “infrastructure and land use processes shape how we live, how we work, where we live, where we work, and how we move goods and services.”

Curtis learned the value that infrastructure investment creates for real estate though his work building the infill North of Massachusetts Avenue–Gallaudet University Metrorail station in Washington, D.C., for which he was able to convince local private developers to contribute $25 million in cash and donate $10 million worth of land. This project made back the initial investment many times over for the developers, the District of Columbia, the Washington Metropolitan Area Transit Authority, and the federal government, which provided the additional $85 million required for the project.