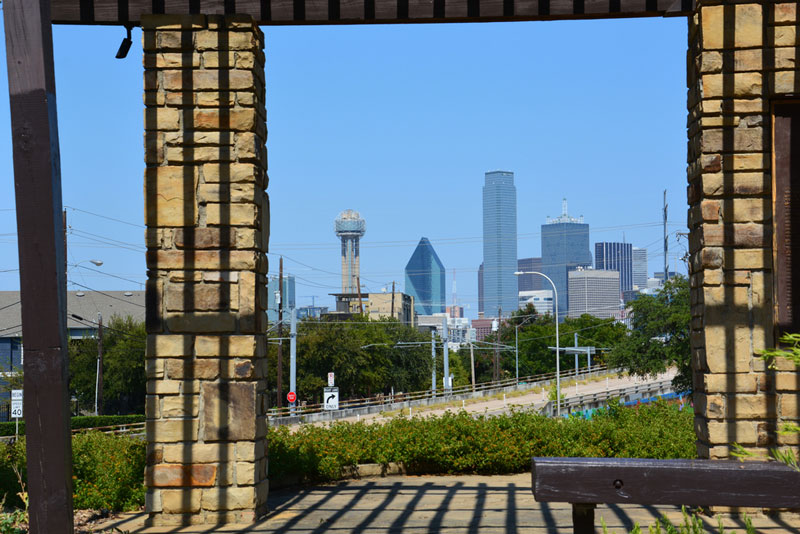 The view of downtown Dallas from Oak Cliff. (Shutterstock)

Across the Trinity River from downtown Dallas, Oak Cliff is one of the city’s oldest areas, dating back to the 1880s. In its heyday, it contained stable, diverse neighborhoods, including what is now one of the nation’s few intact freedmen’s towns, the 10th Street Historic District. Local retailers lined thriving neighborhood commercial corridors, with a streetcar to the city’s central business district.

In the 1960s and 1970s, however, a variety of factors sent Oak Cliff into decline: white flight to the suburbs, construction of an interstate that divided the community, changing demographics that meant that Hispanic and black residents’ demands for basic services were overlooked, a dearth of employment opportunities, and insufficient investment in education and public infrastructure.

Recently, Oak Cliff has been rebounding, the result of coordinated efforts from both public and private sectors. Attendees of ULI’s 2022 Fall Meeting in Dallas can tour new developments that are transforming this area with an eye toward equity.

“The focus by mayors and elected officials on public investment, such as the GrowSouth initiative, as well as attention by small-scale developers and local nonprofit organizations, such as For Oak Cliff, in highlighting need and partnering with investors and corporate partners, is delivering solutions based on equity and community benefit,” says Tamela Thornton, executive director of the Dallas Fort Worth District Council.

Tour leaders will discuss the challenges of keeping Oak Cliff accessible to current residents and small business owners. “The areas that are primarily populated by black and brown people still suffer from neglect, with food and health deserts as well as poorly maintained infrastructure,” says Thornton, who previously led the development efforts for local firm E Smith Communities. “Our goal is to support community investment without the inevitability of gentrification and displacement.” Dallas College and the University of North Texas at Dallas have opened facilities at 4315 Innovation Center, creating a higher education and workforce training hub in the community.

In South Oak Cliff, E Smith Communities partnered with American South Real Estate Fund, a social impact investment fund, to purchase and renovate a vacant building into the 4315 Innovation Center. Opened in October 2021, the facility brings Dallas College, the University of North Texas at Dallas, and Circle GX Technologies as anchors of this community hub for higher education, workforce training, and technology solutions in one of the city’s most underserved ZIP codes. The mixed-use project was intentionally curated to foster an ecosystem that provides job training and a direct pipeline to jobs.

A public-private partnership between the municipality and local developer Peter Brodsky redeveloped a 1970s mall into RedBird, which opens this year and includes facilities for the University of Texas Southwestern Medical Center and Children’s Health, as well as a hotel, a call center, and shops. Adding over 300,000 square feet (27,870 sq m) of office and medical uses is intended to create a destination for businesses looking to redefine the commercial fabric of the southern Dallas community.

The tour also includes South Oak Cliff Renaissance Park, which was until recently a vacant lot and neglected creek, and the AT LAST! Boarding School, which provides weekday academic support, technology access, life skills instruction, and meals to elementary school students from less prosperous families. Cedar Crest Golf Course, an longstanding amenity for the predominantly African-American neighborhood, and nearby recent developments round out the tour.

“Those of us who are cognizant of the components that create an equitable and inclusive environment must collaborate and employ available resources to achieve success within these communities that have been underserved, undervalued, and overlooked for generations,” says Danny Phillips, the president and chief executive officer of local firm Bellevue Commercial. “It is imperative that we also focus on ensuring minority developers and contractors can access adequate capital and contracts for these revitalization efforts. Allowing communities to see inclusive contracting practices is essential to the uplift and sustainability of stable and diverse neighborhoods.”

It’s not too late to register for the 2022 Fall Meeting in Dallas.